Bud Light Hard Seltzer giving you an itchy mouth and upset stomach? You are not alone.

Bud Light Hard Seltzer giving you an itchy mouth and upset stomach? You are not alone.

We saw our first hard seltzer around 2017 and initially the idea was unique in that craft beers were basically king of the summertime with shandy concoctions. But if you are enjoying a beach day or a long day on a boat after a while those options just feel heavy. We first tried Truly which was good, if not great. However social media clamored over the offerings of White Claw when it jumped in the scene.

Not be left behind again big beer giant Anheuser-Busch Companies who were ravaged by the shift to craft beer versus boring big beer was intent on not being left on the sidelines to the hottest drink category in decades: hard seltzer.

The company targeted it’s low end brand favored by college kids Natural Ice, often called Natty Ice. These were the first seltzers released by the giant. Next came the full court press roll out of Bud Light Seltzer. In many respects the same market as your typical light beer or maybe a lighter diet soda, or fancy cocktail.

An interesting development happened with the pandemic of 2020 and the increase of drinking at home, and during working hours we might add. 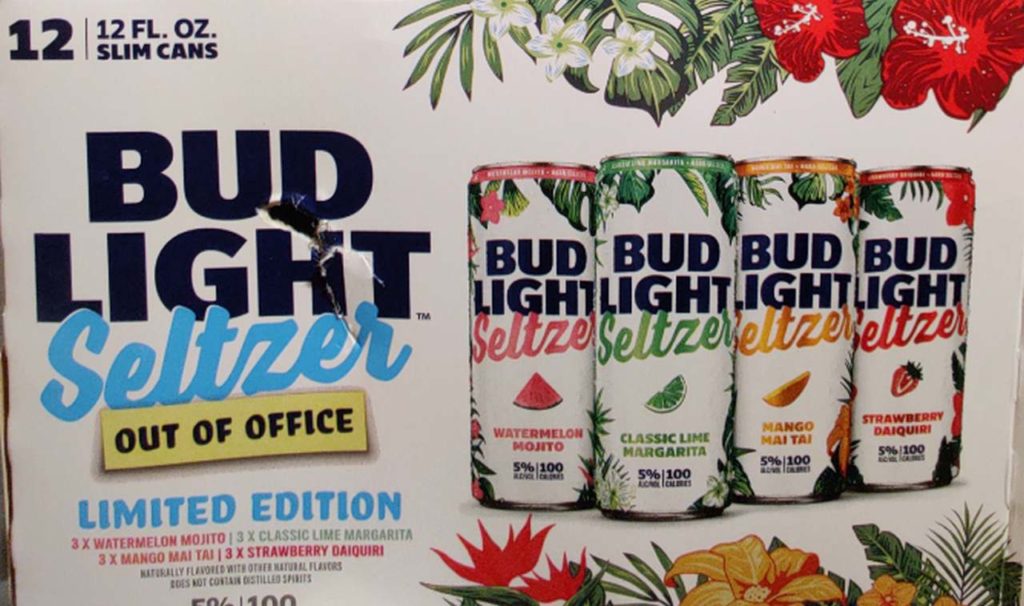 This Bud Light Seltzer “Out of Office” release had really fun flavors like:

It promised all of the fun flavors of a much higher calorie content alcoholic drink, but still with a relatively guilt free 100 calories per 12oz can serving.

We had one of these and noticed that immediately it was much sweeter tasting than the “Original” or “Remix” Bud Light Hard Seltzers. The flavors were also amped up, it seemed way too good to be true to still be clocking in at 100 Calories per can.

Almost on cue towards the end of our serving we noticed our tongue and throat were getting itchy, and almost numb in an unpleasant way. But hey it was spring and the next flavor sounded enticing. After opening the second can we quickly noticed nope, something is wrong here. Checking the can and product packaging we noticed that yes it still has 100 calories. But the additional sweetness was impossible to mistake.

Everything looked the same as the original Bud Light Hard Seltzers. Well everything except the additional Stevia being used to up the sweetness, without adding calories to increase. This is because Stevia is reportedly 30 to 100 times more sweet than typical sugar, and carries zero calorie impact.

Well we know we’ve had this reaction to Stevia before. This is a common allergic reaction, even though the marketing folks hawking Stevia products and Stevia itself will tell you it is “rare”.

Bud Light Hard Seltzer Out of Office Pack with Stevia and Bud Light Seltzer Lemonade with Stevia packs a surprise one two punch to the mouth, and stomach

So we handed our nearly full Bud Light Hard Seltzer with Stevia off to our friend to help finish the drink; with full disclosure that these were not agreeing with my mouth and throat. No issues with the new consumer, at first. Approximately 6-8 hours later was awoken from a sound sleep being nauseous thinking about vomiting. Oh sure they drank too many you might laugh it off. Not so. Almost two properly spaced out 12 ounce servings Bud Light Seltzer with Stevia later and finding one self on the toilet with diarrhea.

However at this point urge from a nauseous I’m going to vomit moved to a diarrhea event. On par with being poised like in Dumb N Dumber.

Upon recall this same friend said hey you know what I had this reaction after consuming some of the Bud Light Seltzer Ugly Sweater Pack of flavors too. 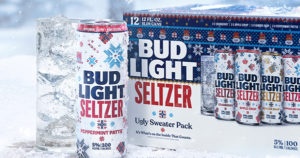 However after searching high and low, we can’t find any nutritional labels for the 2020 Holiday pack that would indicate the use of Stevia in that special edition launch.

So if you find yourself waking up in bed, or nearly waking up to shitting the bed after some Bud Light Hard Seltzers you may have a Stevia allergy.

So what would cause this bad stomach reaction? Well it is again a known side effect of Stevia and other sugar alcohols. The bowl shaking reaction is due to the metabolic rate of your body trying to break down the sugar alcohols and alternative sweeteners. Unabsorbed or excess sugar alcohols often lead to bloating, or diarrhea. It is considered safe by the FDA in quantities of 4 milligrams (mg) per kilogram (2.2 lbs) of body weight.

What if I don’t know if I am allergic to Stevia?

You could always just avoid products with Stevia to be safe. However if you decide you must consume Stevia products, people with the Stevia plant is part of the the Asteraceae family that have been known to cause allergies include ragweed and sunflower seeds. So if you happen to know you have allergies to ragweed, and/or sunflower seeds, and also chrysanthemums, marigolds or daisies you should stay away.

Mouth while it is not widely documented on the internet we have a bad reaction in our mouth that results in itchy scratchy feelings, after this Bud Light Seltzer with Stevia a swollen tongue, and sore throat that lasted a few days, but otherwise cleared up on its own.

Some Stevia products contain added sugar alcohols that may cause unpleasant symptoms in individuals that are very sensitive to the chemicals. A consumer can have a hypersensitivity to Stevia and sugar alcohols, its symptoms can include:

So why is there not a warning on the product packaging about Stevia being added to Bud Light Seltzer Lemonade or Bud Light Seltzer Out of Office? Because as this research paper points out the industry stopped looking into side effects because the FDA said it was fine in 2008, and these companies are trying to make money.

The few cases documented in the peer-reviewed literature were reported prior to the introduction of high-purity products to the market in 2008 when many global regulatory authorities began to affirm the safety of steviol glycosides. Neither stevia manufacturers nor food allergy networks have reported significant numbers of any adverse events related to ingestion of stevia-based sweeteners, and there have been no reports of stevia-related allergy in the literature since 2008. Therefore, there is little substantiated scientific evidence to support warning statements to consumers about allergy to highly purified stevia extracts.

Yes absolutely, so drink with care. Which is a shame as they tasted nice at first. So buyer beware, not all hard seltzers are created equal, and some may make your mouth itchy, and/or need to shit at a inopportune time.

Lastly while we are not doctors or research scientists, we’re here to tell the world that yes in 2021 Stevia is 100% causing allergic reactions orally, and digestively and stopping research, and not having disclaimers is not an acceptable answer or practice.

This website uses cookies to improve your experience while you navigate through the website. Out of these, the cookies that are categorized as necessary are stored on your browser as they are essential for the working of basic functionalities of the website. We also use third-party cookies that help us analyze and understand how you use this website. These cookies will be stored in your browser only with your consent. You also have the option to opt-out of these cookies. But opting out of some of these cookies may affect your browsing experience.
Necessary Always Enabled

Any cookies that may not be particularly necessary for the website to function and is used specifically to collect user personal data via analytics, ads, other embedded contents are termed as non-necessary cookies. It is mandatory to procure user consent prior to running these cookies on your website.